Consequences and the strategy behind nest reuse in a Neotropical thrush

Have you ever seen a bird building its nest? The complex architecture of such structures is intriguing and lovely per se, but it is impossible not consider the hundreds, if not thousands, of trips carrying nesting material. A finished nest results from several days of parental effort aiming at providing adequate microclimate and protection to their offspring. It seems logical that all that energy and time spent in nest construction would be more worthwhile if the parents could have several clutches in the same nest. Despite the high costs of building a nest, its reuse in further breeding attempts is rare for most bird species, leading to repeated changes in nest location. Why should the construction of such ephemeral structures have evolved from natural selection despite being so expensive? Among the hypothesis to explain this phenomenon, is the fact that old nests might be prone to accumulate ectoparasites, compromising offspring health. Another likely reason is that by constantly changing nest location, parents could avoid loss of offspring to predators with good spatial memory. More specifically, bird species that breed outside cavities must deal with the dismantling that environmental hazards, such as rain and wind, impose to nest structures. Because old structures degrade quickly when exposed to the elements, building a new nest every breeding attempt is obligatory rather than a choice for many species.

The use of human buildings as nesting sites adds another context to this framework. Some nests in human buildings are particularly less exposed to the weather, remaining integer for several years. We took advantage from an urban population of a South American passerine, the Pale-breasted Thrush (Turdus leucomelas), in which the reuse of nests in buildings is exceptionally frequent (about 50% of all nesting attempts) to study the potential causes and consequences of this behavior. We found that nest reuse is nearly three-fold more common after a successful than after a failed clutch for consecutive breeding attempts within the same breeding season. This is in accordance with a strategy known as “win-stay, lose-switch” that has a wide applicability, from casino games to machine learning. In summary, parents in our study species are essentially playing with the memory of nest predators – the main source of nest failure in our study population – when they decide to reuse a successful nest. However, what could be a good bet is subject to a third player. The Pale-breasted Thrush is victim of a brood parasitic bird, the Shiny Cowbird (Molothrus bonariensis) whose females lay eggs in nests of host birds, which then will care for the parasite offspring. In addition, cowbirds also puncture host eggs, reducing the breeding success of thrushes. Therefore, that supposed right decision of female thrushes of reusing successful nests has no effect on the number of young they produce, which is influenced by the presence of cowbirds: both reused and new nests produce less offspring when parasitized by cowbirds. 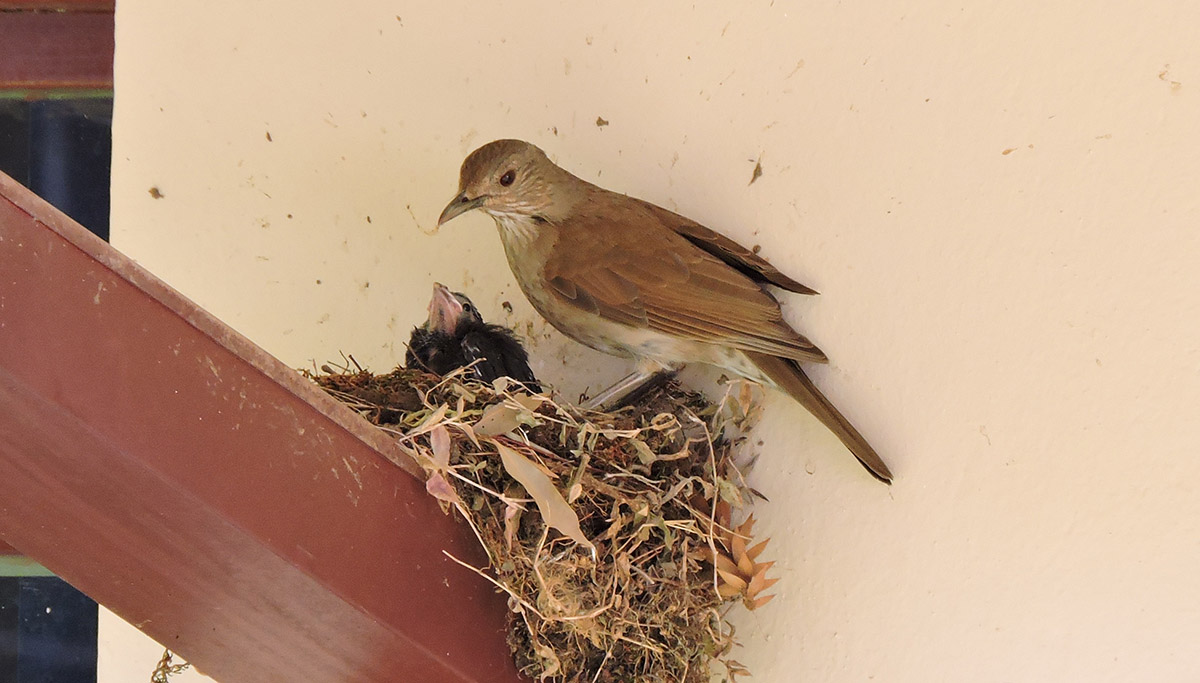 Cowbirds find suitable host nests primarily by following parents during nest construction. Thus, and because reused nests presumably require less time and effort to be lined than a new nest, we found that cowbird parasitism is less frequent when nests are reused within the same breeding season. Another implication of the reduced parental effort in lining an old nest appears when we look at the timing of breeding. Pairs reusing old nests lay the first egg on average one week earlier than those that build new nests in the beginning of the breeding season.

In conclusion, nest reuse is more common after successful clutches and potentially advantageous in our study species, allowing earlier breeding and avoiding cowbird parasitism. We highlight that the use of buildings as nesting sites allowed thrushes to frequently reuse their nests, a rare behavior in natural conditions, and benefit from the potential advantages associated to this strategy. Future studies on other urban populations of open-cup nesting birds, especially those able to nest in buildings and other artificial nesting sites, will contribute to understand the potential benefits and disadvantages of reusing nests.

The results of this study were recently published in the Journal of Field Ornithology:

Consequences and the strategy behind nest reuse in a Neotropical thrush